Less than an hour after The Merge was successfully deployed on the Ethereum (ETH) network, a user shelled out 36 ETH to create the registry and made the first non-fungible token (NFT) on the Proof of Stake (PoS) network. In fact, this equates to more than R$300,000.

The non-fungible token is part of a group of NFTs that display panda faces celebrating the transition from Ethereum to PoS. The collection can be found on the OpenSea NFT Market. The minimum price for NFTs is 0.6 ETH. That is about 5,000 Brazilian reals at the current exchange rate in reals.

The consolidation turns the ETH network into a PoS

The merger was the most awaited update to the Ethereum network and it successfully completed this Thursday (15).

The update changed the network consensus mechanism from Proof of Work (PoW) to Proof of Stake (PoS).

While there was an expectation that the upgrade would help reduce network fees, the Ethereum Foundation has already made it clear that this will not happen. After all, the merger, according to the foundation, is “a change in the consensus mechanism” and “not an expansion of network capacity.”

However, other improvements and solutions that will be implemented going forward are expected to help reduce fees and make transactions on the network faster.

On the other hand, the main change in The Merge is to make the network greener. This is because moving from Ethereum to PoS will significantly reduce your energy consumption by up to 99%. Moreover, the update should shrink the network.

ETH price may go up after the consolidation

This is expected to attract more investment into the ether cryptocurrency and increase its price. At the time of writing this article, the cost of ETH is around R$8,270.
In the last 24 hours, the price of Ether has increased by only 1%, and in the past seven days the price has fallen by almost 4%, even in the face of the largest update in the history of the Ethereum network. 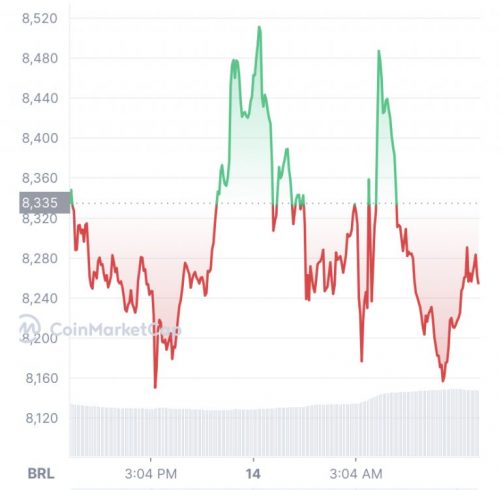 Ether price chart for the past 24 hours. Source: CoinMarketCap